Decades ago, I spent a summer working at bread bakery in my hometown of Austin, Texas. Among the breads they offered was a “corn bread”–not, mind you, a baking powder-leavened quick bread, but a yeasted loaf made with cornmeal. The memory of that bread got me thinking about whether it would be possible to incorporate some cornbread elements into my beloved sourdough. I decided to experiment. The goal: a sourdough discard loaf with cornmeal, cheddar, jalapeno. Although the recipe is still something of a work in progress (more on that below), I really can’t complain about the results.

Normally, I will test a recipe several times before sharing it with you here. But given the huge surge of interest in my recipe for a Country Loaf with Discard Sourdough Starter, and the tastiness of my initial attempt at this variation, I thought it was worth sharing the recipe now.

A few notes: This bread is leavened exclusively with discard starter. More details about the origins of the basic recipe and the quirks of using sourdough discard as your sole leavening agent can be found in the “Country Loaf with Discard Sourdough Starter” post linked above. I did make some changes to the basic recipe here. One of my biggest concerns was how the additions, especially the cornmeal, might hinder gluten development. With that in mind, I tried to promote some extensibility by doing a true autolyse before adding the starter. In addition, because cornmeal grains are kind of sharp/jagged (for lack of a better description), I decided not to include cornmeal in the initial flour mix, but instead cook it into a porridge, which was then added via lamination, along with the jalapeno and cheddar, before transfer to the bulk rise container.

I was also a bit concerned about the jalapeno and/or cheese scorching, so I baked the bread at a slightly lower temperature–20 minutes covered at 475 F, followed by 25 minutes uncovered at 425 F. Finally, in the past, I would use fridge-cold water to mix the dough for a discard starter loaf, in order to slow down the bulk fermentation while I was away from home at work during the day. Since I’m teleworking full-time now, that consideration has dropped out, and I used room temperature water here.

Ultimately, I ended up with a crust that was somewhat lighter and softer than usual, and the loaf was an absolute dream to slice. Also, the smell as it was baking was delightful. I’ve enjoyed it with salted butter, in some seriously delicious avocado toast, and as a perfect accompaniment to black bean soup.

So what are my caveats? I think the hydration level of my dough ended up being crazy high–maybe even 90%. With the water in the autolyse and the additional water added with the discard starter and salt, I was already up to 80% hydration. But then I added the cornmeal porridge (and cheddar and jalapeno), which I estimate probably increased the hydration by at least 8-10%. Because of this, and because I think I had a bit of an overproofing situation, I ended up with an extremely soft and puffy dough, which was basically impossible to shape as normal. I did the best I could to gently nudge it into a boule. Surprisingly, however, it scored easily when removed from the fridge the next day, and the resulting bread was great. 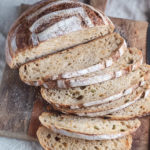 A discard-starter-leavened loaf with southwestern flavors.

For the cornmeal porridge:

– I’ve specified spring water/bottled water for the bread in the recipe above because, where I live, the tap water is heavily chlorinated, which will kill the wild yeast in my starter. But you may be able to use tap water in your community.

-You’ll note that I’ve given ranges of quantities for some ingredients–specifically, water and the cornmeal porridge. When I made this bread, I used the amounts on the high end of these ranges, and my dough was extremely soft and puffy, which made it quite tricky to shape, though the resulting bread was lovely. For slightly easier handling, use the smaller amounts of spring water and cornmeal porridge.

-Because I was concerned about the additions hindering gluten development, I used bread flour here, but I think unbleached all-purpose flour would also work (at least King Arthur brand)

4 thoughts on “Sourdough Discard Loaf with Cornmeal, Cheddar, and Jalapeno”