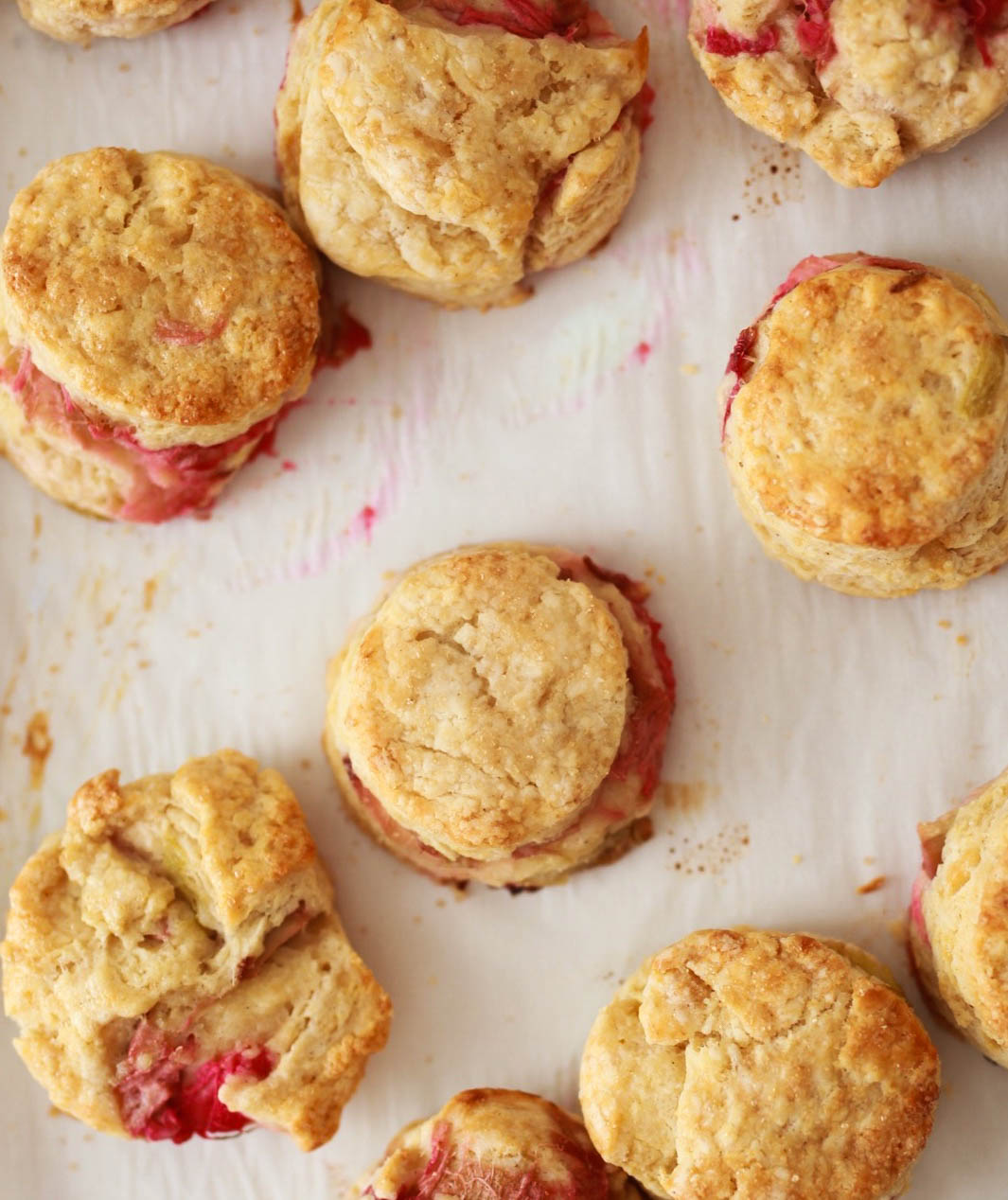 When I got it into my head that I wanted to make rhubarb-buttermilk-brown sugar scones, I did what I normally do in such situations: I began scouring the internet for a basic buttermilk scone recipe that I could adapt. After a bit of searching, I settled on a recipe from a well-known blog that shall not be named. It did not produce scones anything like what I was looking for: The dough was extremely wet and sticky–even wetter and stickier than the dough one might use for drop biscuits–and could only be cut into triangles after substantial time in the freezer. Even worse, the baked scones, while inoffensive, were basically muffins, without a hint of flakiness. I was not pleased.

I was about to return, with a sigh, to more internet-searching, when I remembered that I owned a bunch of these things called “cookbooks,” including an unassuming but wonderful little volume called The Best Quick Breads, by Beth Hensberger. Long before food blogs were a thing, I’d been baking scones, cornbread, and biscuits from that book, and Hensberger’s recipes never failed me. Her cookbook includes at least two buttermilk scone recipes, one richer, one leaner. I decided to adapt the richer one, which, in its original form, includes dried figs and walnuts.

Granted, I made a lot of changes–including, inter alia, substituting some brown sugar for white, replacing the figs and walnuts with roasted rhubarb, and using a different technique to incorporate the butter. But the basic ingredient proportions in the dough are Hensberger’s.

As a hobby baker with virtually no formal training, it’s the lack of an internalized sense of what those basic proportions should be that leads me to lean on other people’s recipes when developing my own. Here, the primary changes I made included (1) to grate in frozen butter, rather than rubbing in or cutting in fridge-cold butter, and (2) to incorporate the rhubarb by spreading it on the rolled out dough, then doing a business-letter fold to create a sort of laminated effect. I learned this technique from Claudia Brick, on her blog The Brick Kitchen. She in turn had adapted a recipe by Sarah Kieffer, who in turn was riffing on a recipe by Ina Garten. So, while this recipe is a reminder that cookbooks still exist and matter, it’s also a product of the Internet age, and an emblem of all that is great about the baking communities that the Internet has fostered.

A note on technique:

The other significant change I made to the original recipe involves the timing and method for cutting out the scones. For round biscuits or scones, you’ve probably noticed that recipes direct you to press the biscuit cutter straight down, without twisting, when cutting out the biscuits/scones. The idea there is to maximize flakiness–by pressing straight down, you preserve the layers. This instruction is all well and good, but, because scone dough is soft and often a bit sticky, it’s often hard to avoid twisting the biscuit cutter a bit as you pull it out. And even if you do manage to avoid twisting the cutter, the mere acts of pressing it down and pulling it out may compress the dough a bit.

While many recipes suggest freezing the scones once they’ve been cut out, I now freeze the rolled-out dough before cutting out the scones. Frozen or semi-frozen dough slices more cleanly, and the frozen butter is less apt to be smushed into the flour, preventing flakiness. You can then ALSO pop the cut-out scones back in the freezer before baking.

Basically, for scone dough, as for pie dough, the guiding principle is cold, cold, cold. While it can be a bit tedious to keep popping the dough back in the freezer, the resulting goodness is worth the effort: 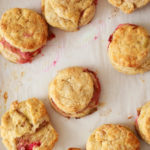 A rich and flaky scone, bursting with rhubarb. Loosely adapted from The Best Quick Breads, by Beth Hensberger.