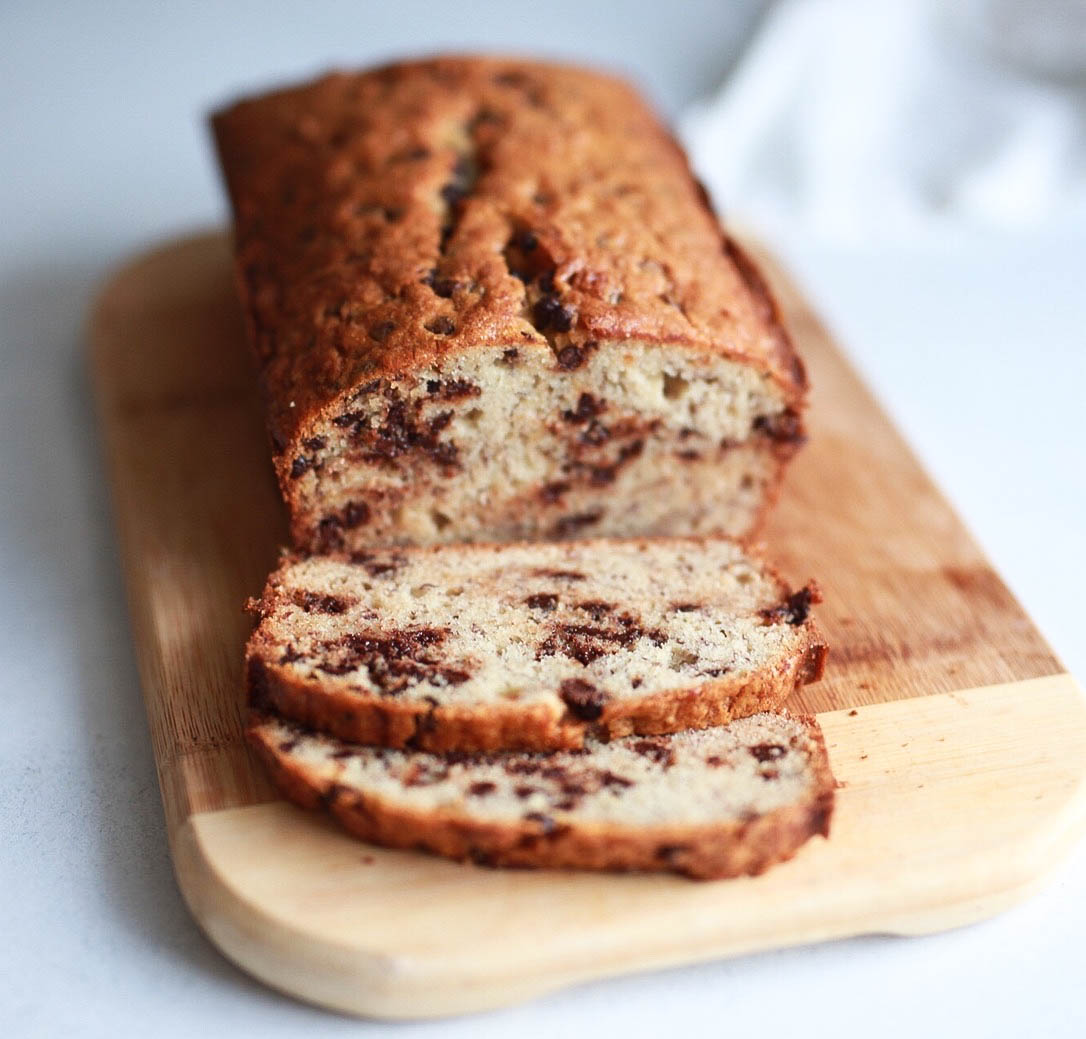 I once read an article about starting a food blog that included some advice on content, including the entreaty: “Ask yourself, does the internet really need another banana bread recipe?” I read that sentence somewhat abashedly. Even at that early stage in this blog’s development, I envisioned a post that would include the recipe for my mother’s chocolate chip banana bread. Several rhubarb and panna cotta and pavlova posts later, perhaps foolishly, I’ve decided to press forward with that plan.

Admittedly, this is my favorite banana bread partly because it’s not really a bread. The original recipe comes from an oh-so-1950’s cookbook called Thoughts for Buffets, and is actually titled “Chocolate Chip Banana Loaf.” While this dessert is baked in a loaf pan, it really is more of a cake than a quick bread. Indeed, the original recipe called for cake flour (though my mother always used all-purpose), and the batter is made using a creaming method, rather than by mixing wet ingredients into dry ingredients. The original recipe, incidentally, also included a rather insane amount of sugar–I think something like 1 3/4 cups! My mother always used much less than that, and while I don’t approve of all of her attempts to healthify recipes, I’ve found that using the smaller amount of sugar–3/4 to 1 cup–is the right call here. One notable change I’ve made from my mother’s recipe is to use mini chocolate chips. The banana bread will be delicious whatever size chocolate chips you use, but with regular sized chips, I always have issues with the chips sinking to the bottom of the loaf. Mini chips solved this problem. (I also tend to less chocolate than called for in my mother’s recipe–usually about 1 cup of chips. Feel free to stick with the original 2 cups if you’re a chocoholic!)

While this banana bread might not seem particularly exciting, I felt it was worth sharing for several reasons. First, it is definitely, undeniably, delicious. Second, it’s fairly easy to throw together– to date, it’s the only dessert recipe that I know by heart. When I need to come up with something at the last minute for a party or potluck this is often the recipe I turn to. Third, if you are a novice baker, or looking for a recipe that you can make with kids, this banana bread is ideal–this is one of the recipes through which I learned a lot of baking basics, including when substitutions are possible and when they’re not and what instructions need to be followed exactly and which don’t. (More on that below.) If you understand the ways in which this recipe is flexible, and the ways in which it isn’t, that knowledge can guide your baking more generally.

So what is flexible? Besides the amount of sugar (I recommend anywhere from 3/4 to 1 cup), I’ve discovered that the amount of butter can be reduced a bit if you increase the amount of sour cream. While the recipe calls for 1/2 cup (8 tablespoons) of butter, I often use 6 tablespoons, while increasing the sour cream from 1/4 cup to a 1/3 cup. I’ve gone as low as 1/4 cup of butter, increasing the sour cream to 1/2 cup, and the banana bread is still good–though a bit less decadent. But I wouldn’t reduce the butter any further. As my mother taught me, you can also substitute a variety of dairy options for the sour cream – yogurt works, or buttermilk, or you can make your own “sour milk” with regular milk and a bit of lemon juice. Light sour cream or 2% yogurt or milk is okay–but DO NOT use nonfat. (I accidentally bought nonfat sour cream once–isn’t that an oxymoron?–and the banana bread definitely suffered.)

The bread can be baked in a standard/small 8 inch by 4 inch loaf pan, which is what my mother always used, or a larger loaf pan. If you go with the smaller pan, the loaf will take longer to bake (around 90 minutes). If you use a larger pan, you can reduce the baking time.

If you have some overripe bananas but aren’t feeling like making banana bread at that moment, feel free to freeze the brown bananas and then just pull them out of the freezer to defrost when you’re ready to make the banana bread. (I have a tendency to just chuck the brown bananas in the freezer unpeeled, but if you are more finicky you can unpeel and mash them first, and store the mashed banana in a freezer-proof container.) Speaking of freezers, the baked banana bread also freezes well–just wrap the loaf well in aluminum foil, place in sealed freezer bag, and remove it from the freezer to defrost at room temperature a couple of hours before you want to eat it.

What’s not flexible? You really do need to use real butter and sour cream/yogurt/milk, and, as noted above, NOT nonfat. Could you substitute something non-dairy? Maybe, but I can’t vouch for the result. You also do need to cream the butter with the sugar, rather than simply melting it and mixing it in with the dry ingredients. If you do the latter, you may get a banana bread that you find acceptable, but it won’t be My Mother’s Chocolate Chip Banana Bread, and, again, I won’t vouch for the result! Finally, you absolutely must not over-mix the batter. The flour should be folded in just until no dry bits remain.

Finally, don’t be afraid to bake the loaf until it is a deep golden brown. That burnished crust is possibly the best part! 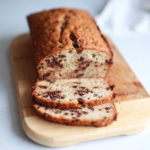 A banana bread that is really a cake.