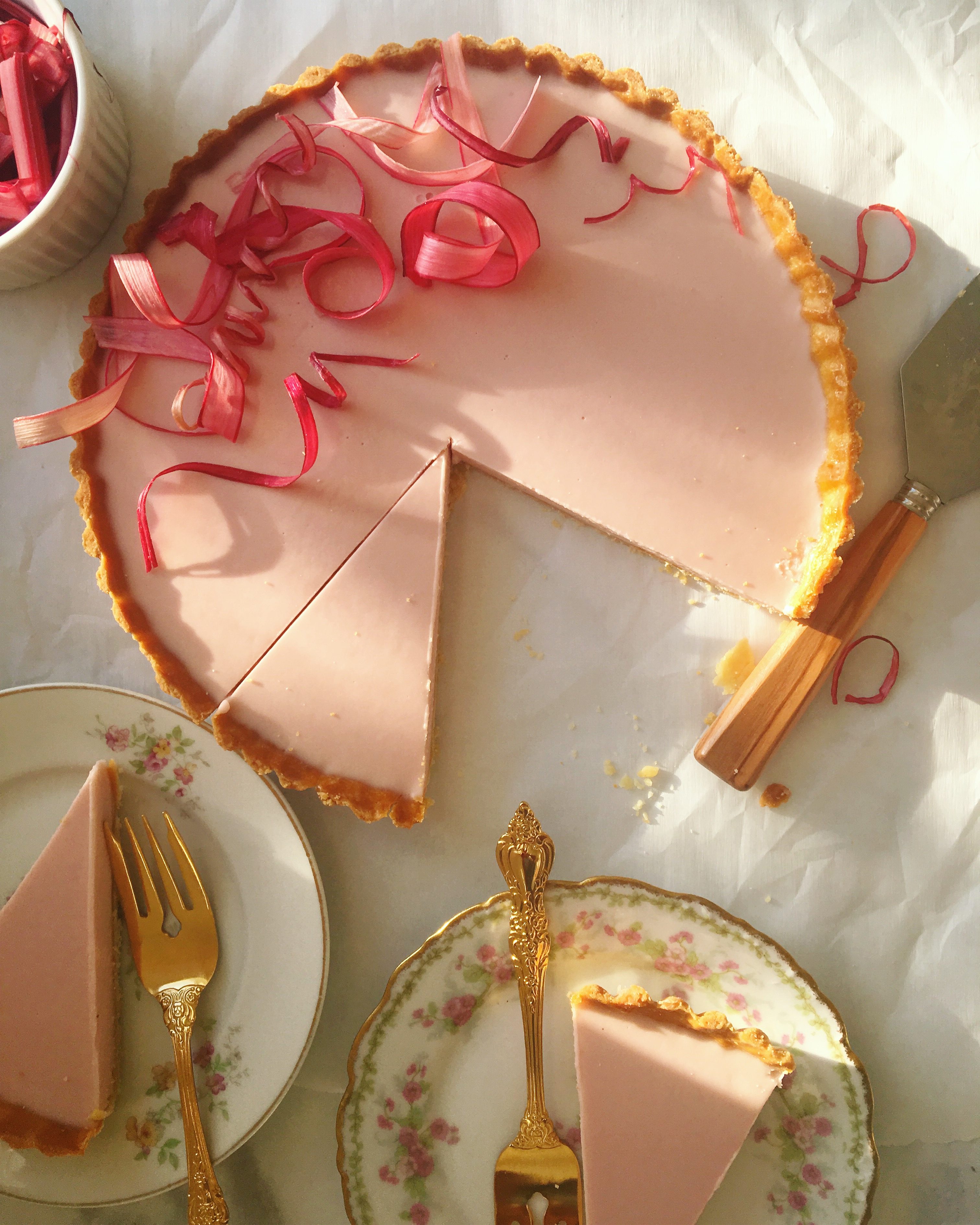 For years, my favorite British cookbook authors have taunted me with their blithe references to winter tarts and cakes and pavlovas made with “forced rhubarb.” (Example: Nigella Lawson, How To Be a Domestic Goddess, page 107, “Rhubarb Tart”: “This is perfect for January, when the new season’s forced rhubarb is just in, rosy and budding with its rhubarbiness.”)

For the last few years, I’ve spent winters searching the groceries and markets of New York City, and then Washington, D.C., for this elusive “forced rhubarb” with no luck. Last year, my beloved rhubarb finally appeared in D.C. in late April (APRIL!).

Then, this January, I was at a Whole Foods in New York City picking up groceries for some friends I was staying with, and there it was–rhubarb! In January! I lingered in the produce section for a few minutes, debating whether to buy the whole lot and bring it back with me on the train to D.C. Ultimately, I resisted the temptation, reasoning, if a Whole Foods in New York now had forced rhubarb, surely one in D.C. would, too?

When I returned home to Washington, I visited my regular Whole Foods with high hopes. No luck. I went to two other Whole Foods in town. Again no luck. I resigned myself, again, to a rhubarb-less winter.

Then, a couple of weeks ago, I was at my local, non-fancy Harris Teeter, buying grapefruits and kiwis for a winter-appropriate tart, and I saw it: Gorgeous, fuschia, definitely rhubarb. I immediately grabbed a pound.

Admission: I originally wanted to attempt a rhubarb panna cotta tart because I envisioned it as a clean pink canvas to display dozens of rhubarb roses. However, when I actually got around to shaping the roses, they were even more fiddly than usual. (The problem was probably that the forced rhubarb stalks, though fantastically and gorgeously pink, were quite thin.) I decided to go with rhubarb ribbons instead, and I actually ended up loving the ribbon-decked tart even more than the rose-strewn version I had envisioned. I mean:

The rhubarb flavor here is distinct but subtle. Next time, I may experiment with increasing the quantity of rhubarb for more intense color and flavor. Or I may not. This perfectly pink, not-too-sweet tart is pretty lovely as it is. 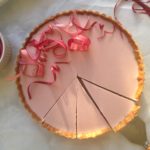 The filling for this pretty pink tart is based on this blackberry panna cotta recipe. The tart shell is my go-to sweet shortcrust pastry from the cookbook Soulful Baker, by Julie Jones.

To glaze the tart shell:

One person who made this recipe commented that her filling set with lots of unsightly little bubbles on the surface. To avoid this result, try not to whisk in too much air when combining the rhubarb-cream with the softened gelatin, and pop any stray bubbles with a toothpick after you pour the filling into the shell.