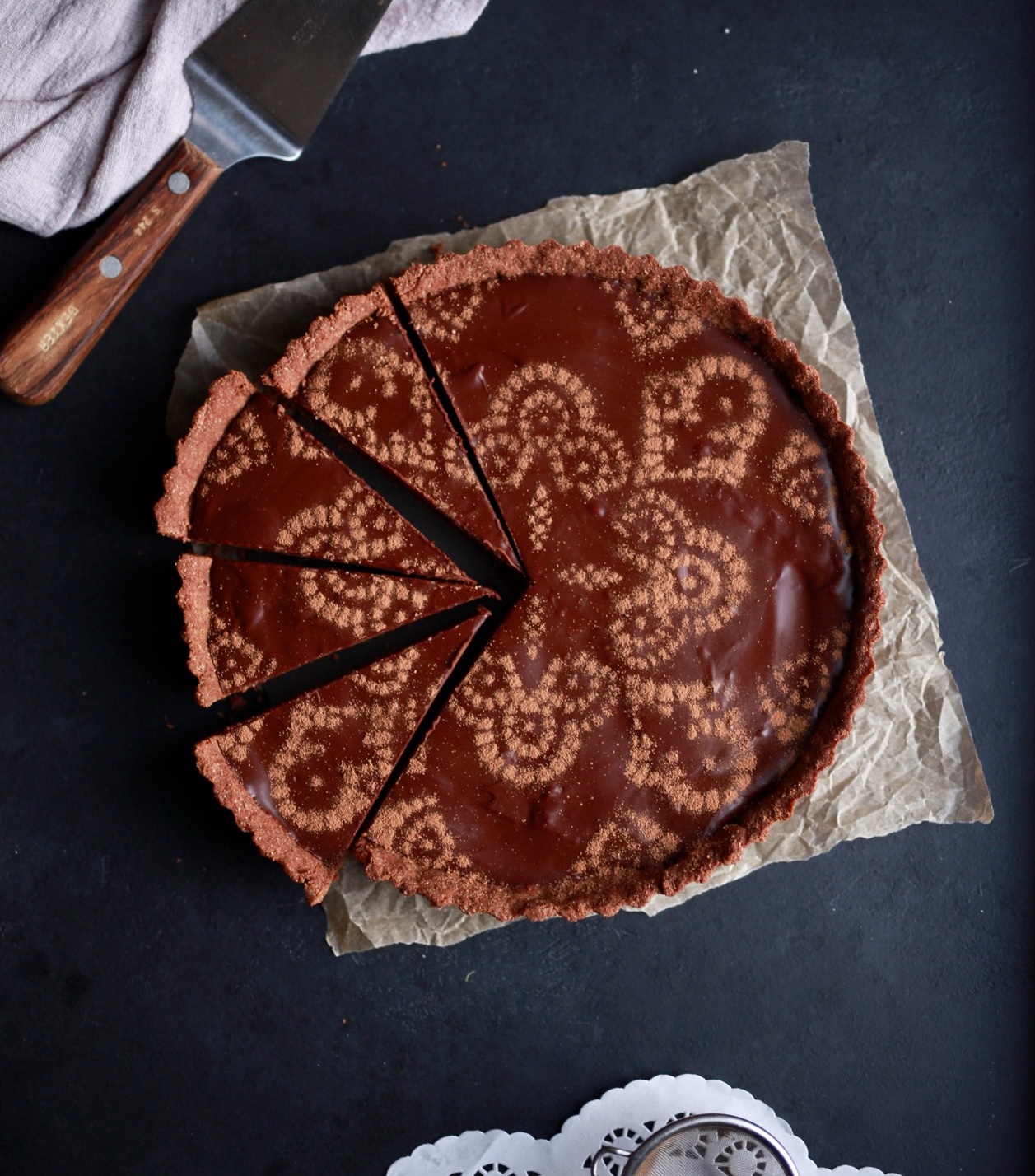 This chocolate “caramel” tart was born of a desire to redeem myself after a baking fail. It was Passover, but I had found some lovely pink rhubarb at the market and couldn’t get the idea of a rhubarb tart out of my head. I decided to try an almond flour crust, but, rather than following any actual recipe, I figured I would just do as I would for a normal crust–some butter, sugar, a pinch of salt, and egg yolk to bind everything together. The crust baked up nicely and the tart–which was topped with a gorgeous lattice of poached rhubarb–looked beautiful. But when I attempted to release it from the tin . . . it wouldn’t budge. The egg yolk had basically welded the tart to the tin. I suppose I could have just moved on, waited for Passover to end, and returned to my normal tart-baking routine. But I needed redemption.

Nonetheless, I didn’t have time for another rhubarb lattice or anything similarly fussy. A chocolate tart with a simple ganache filling seemed doable. This time, after a bit of googling, I decided to follow an actual recipe for an almond flour crust. (Looking for chocolate, I adapted this one.) While a ganache filling would have been the easiest route, truth be told, that seemed like a bit too much chocolate for my taste. Then, in the course of my almond-flour-tart-crust googling, I happened across a recipe for vegan caramel. Although the ingredients and technique were totally different, it brought to mind the dairy-free cacao-caramel bites I made a few months ago from the “Fresh & Light” section of Donna Hay’s remarkable tome, Modern Baking. Those morsels involved a “caramel” made of soft, sticky dates whizzed in the food processor with nut butter, coconut oil, and raw cacao powder, and they were a huge and unexpected hit with my friends.

Since I was already making a gluten-free, dairy-free crust (thanks, coconut oil), I figured, why not go all in? The vegan, gluten-free tart that resulted was, if I do say so myself, rather a triumph. It’s sweet and satisfying, but not TOO sweet. The only refined sugar is from the dark chocolate in the vegan ganache. It released from the tin easily. (Hallelujah!) And it is probably the easiest, fastest tart I have ever made. Be forewarned, though: the “caramel” is in scare quotes for a reason. This tart tastes a bit, well, healthy. But in a good way. And the thick layer of chocolate ganache does add some level of decadence, dairy-free though it is. (I splurged and used some Valrhona feves–the quality of the chocolate does make a difference here.) 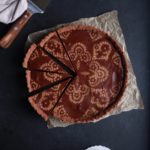 The “caramel” for this dairy-free, gluten-free tart is made of soft dates blended with almond butter, coconut oil, and cacao powder. The vegan chocolate ganache topping adds a bit of decadence. The date caramel filling is adapted from Modern Baking by Donna Hay. The crust is adapted from this recipe, on the blog Gimme Some Oven.

For the caramel, use the softest, stickiest, gooiest dates you can find. Medjool are probably your best bet among widely available varieties. When I made Donna Hay’s caramel-cacao bites, I used fantastically soft and sweet Persian dates from the culinary mecca Kalustyans, in New York City. But Medjools should work fine, as long as they are extremely soft.

To make the caramel, you do need a large food processor (rather than a mini one), and its motor does need to be able to handle some heavy-duty blending. (If you try to mix the filling in a wimpy food processor, you may damage the motor.)

To cut the tart, use a large, sharp knife that has been heated by placing the blade in (or under) hot water, then drying it off.