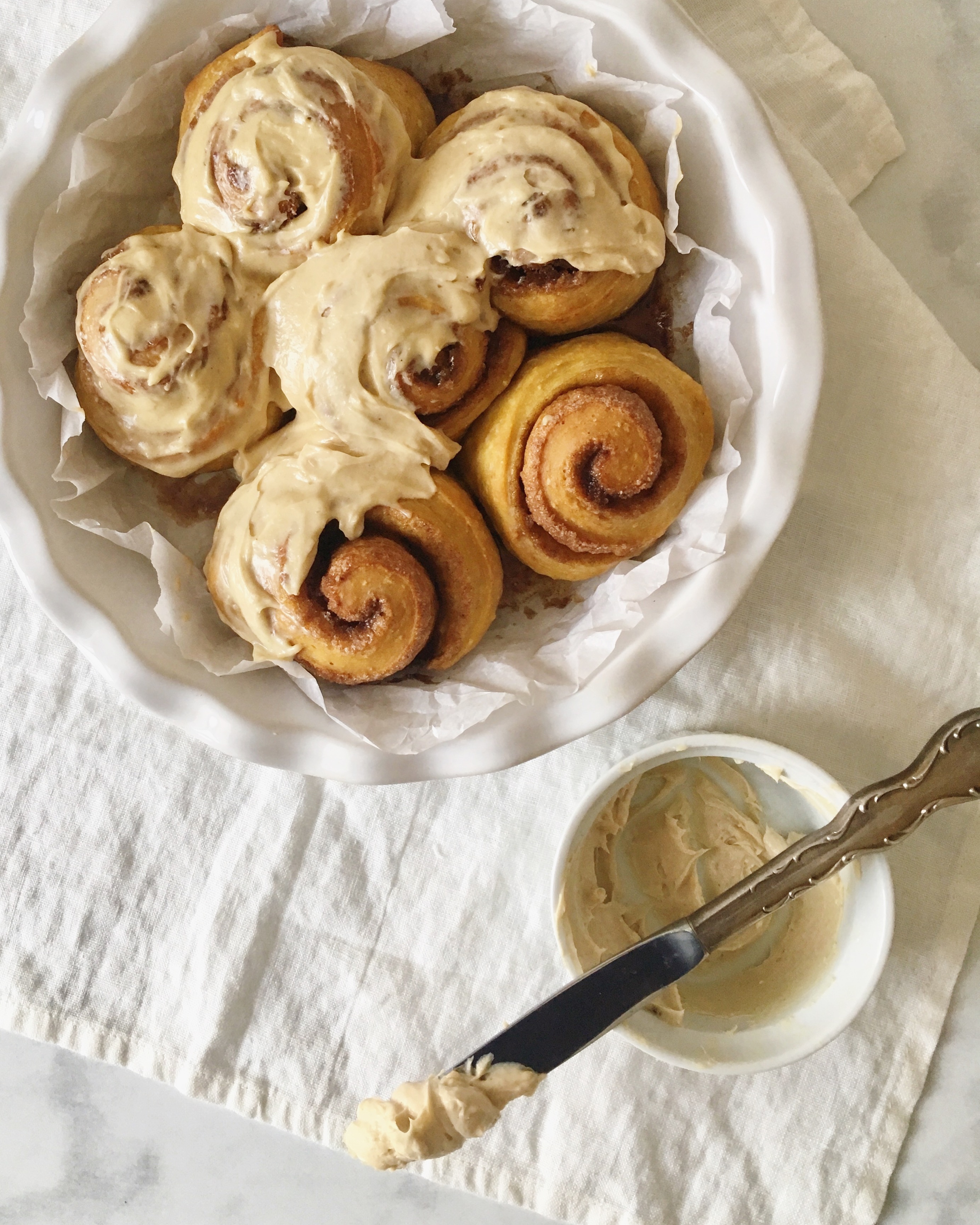 Given the choice between a muffin and a sweet, yeasted roll, however, I will always, ALWAYS, pick the yeast bread. For the tantalizing carrot-maple-tahini-cream-cheese combination to live up to its fullest potential, I decided that I needed to find some way to incorporate it into a sweet roll.

As it happens, there’s a Smitten Kitchen recipe for pumpkin cinnamon rolls that I probably could have adapted for this purpose. But I decided to instead play with the pumpkin bread dough recipe in one of my new favorite cookbooks, Holiday and Celebration Bread in Five Minutes a Day, by Zoe Francois and Jeff Hertzberg. Their “bread in 5” method relies on a dough that can be made ahead of time and kept in the refrigerator for up to five days before baking, which is perfect if you, say, only want to bake a few cinnamon rolls at a time. In addition, this particular dough does not require a stand mixer. (I was especially grateful for this feature the first time I made these cinnamon rolls, which happened to be the day my stand mixer stopped working.)

And that maple-tahini-cream-cheese icing? It’s everything I hoped it would be and more. Seriously, it’s eat-with-a-spoon good. You need these rolls in your life. 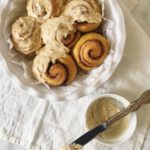 Carrot cake, but in cinnamon roll form! Adapted from the pumpkin pie bread cinnamon rolls in Holiday and Celebration Bread in Five Minutes a Day by Zoe Francois and Jeff Hertzberg.

Although I’ve given instructions for making 12 cinnamon rolls, because the dough keeps for so long in the refrigerator, there is no need to bake all twelve rolls at once. The total dough weight is about 2 lbs. You can weigh out one pound of dough and use it to make six cinnamon rolls one morning (adjusting the filling an frosting quantities), and then make six fresh rolls the next morning, for instance.

The cinnamon roll recipe from which this is adapted specifies slightly greater quantities of butter, sugar, and cinnamon for the filling. I found that the quantities above were plenty–indeed, you may still have a bit of cinnamon-sugar mixture left over. But feel free to be more generous, if you think the rolls are not decadent enough.

My new favorite way to cut dough for cinnamon rolls is to use nylon thread or fishing line: take a long piece of thread, position it under the log of dough where you want to make  your first cut, then wrap it around the log and pull the ends of the thread in opposite directions to cleanly slice through the dough. Repeat.