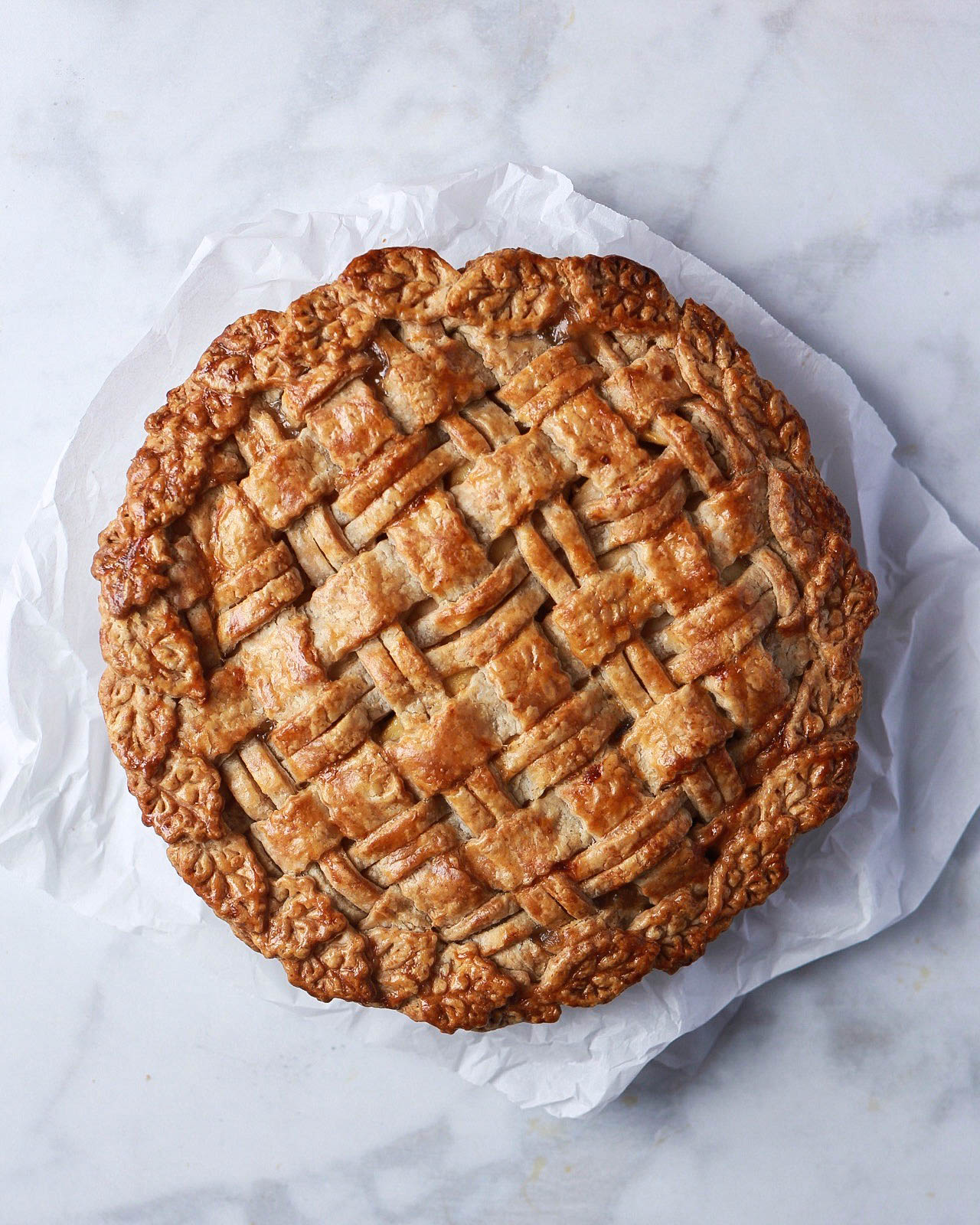 I’ve admitted that sometimes my recipe ideas begin with an aesthetic vision. I now will admit that they also sometimes begin with a snappy recipe title. The original name for this whiskey-ginger apple pie was “double rye apple pie.” And, yes, I thought of the name before I came up with a recipe.

About a year ago, I came across Zoë François’s peach pie recipe, which introduced me to a brilliant technique: The sliced peaches macerate with bourbon, turbinado sugar, and a dash of salt until they release their juices. The liquid is then combined with cornstarch and thickened on the stove, then mixed back into the raw peaches before the filling is scooped into the crust and popped in the oven. As I read this recipe in the early days of autumn, I wondered if I could try the technique with apple pie. And then, of course, I had my brilliant thought: If I used rye whiskey in the filling and added some rye flour to the pastry, I could call the recipe “double rye apple pie.” The rhyme was just too irresistible. And so a recipe was born.

It did take me a few tries to get the recipe right. Apples release less juice than peaches, so the 4-5 tablespoons of cornstarch that Zoë calls for in her recipe wouldn’t work unless I added a bit more liquid. I suspected that increasing the whiskey would throw the balance of flavors off, so I instead added a splash of apple cider. Success!

So what made me decide to flavor the pie with just crystallized ginger, and no traditional cinnamon or such? Again, I have to admit, it was the lure of a snappy alternative recipe title–the “Whiskey-Ginger” moniker I went with above. And you know what? It worked.

1. If you don’t like whiskey, feel free to just increase the apple cider. The pie will still be delicious.

2. For the most complex flavor, try to use a mixture of apples. I like using local and heirloom varieties, but any crisp and flavorful apples will work – Stayman Winesap, Ida Red, Granny Smith, Braeburn, and Fuji are all fine.

3. The crust recipe below — which is based on a trusty all-butter pie crust recipe from Smitten Kitchen — makes enough for a standard double crust pie, or one with a very simple lattice top. If you want to try a more intricate lattice and/or additional decorative flourishes like those shown in the photos above, you’ll need to make a larger amount of dough. For the pie above, I made a 1.5 recipe, and I did still have a bunch of dough leftover.

4. I baked my pie in a pyrex pie pan. If you use a metal or ceramic pan, you can leave the oven at 425 F rather than reducing the temperature to 400 F as soon as you pop the pie in the oven. 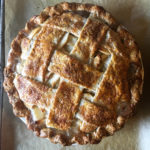 A.k.a. "Double Rye Apple Pie." The filling for this apple pie is simply flavored with rye whiskey and crystallized ginger; there's rye (flour) in the crust, too. The all-butter crust recipe is adapted from Smitten Kitchen. The filling was inspired by this peach pie from Zoë François.

Roll out the crust: