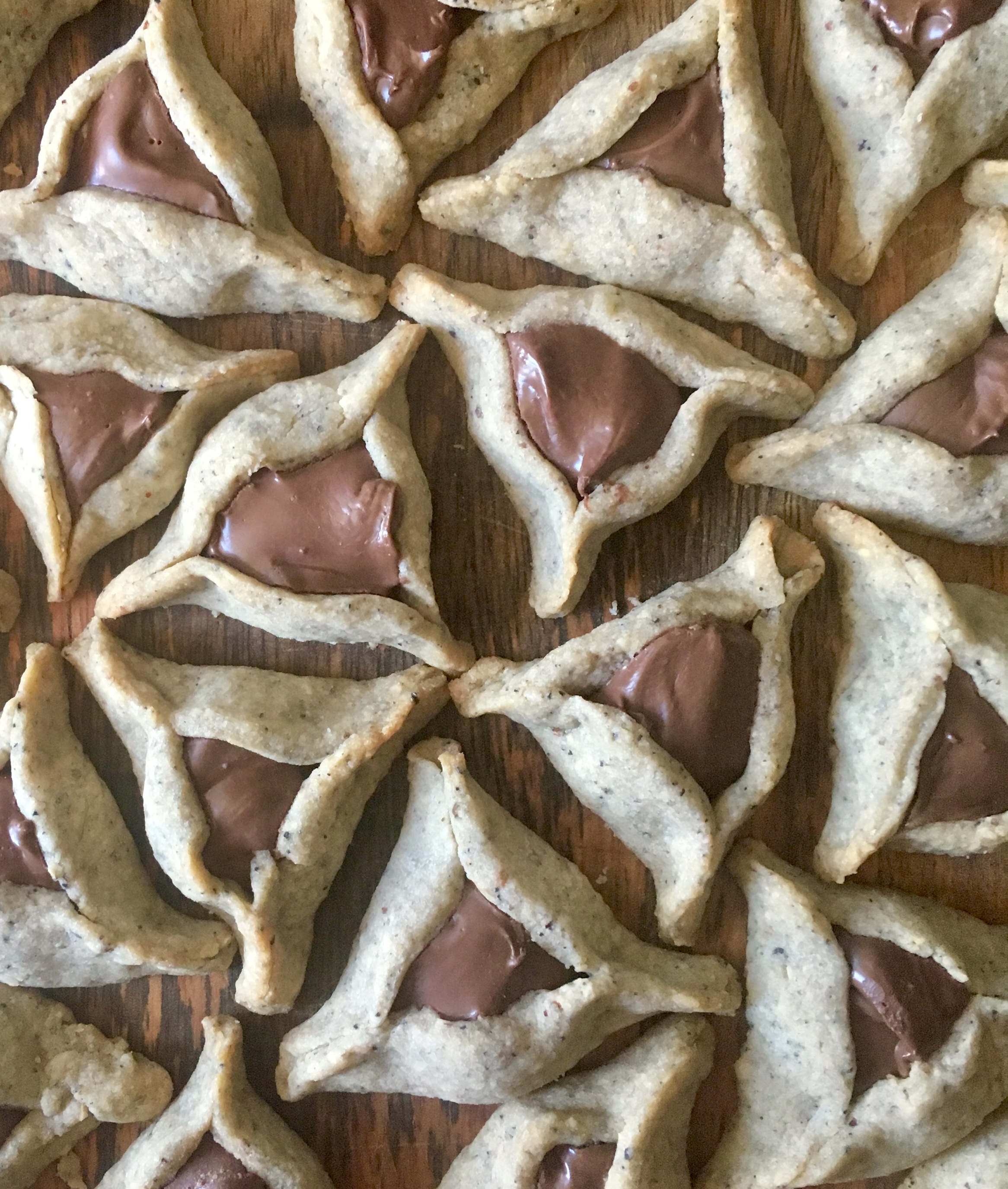 When I was a child, my mother made hamantaschen for Purim using a dough recipe that involved butter and chilling and orange zest and was very gourmet. (It was probably from Gourmet.) Her fillings were traditional—prune and, if we were lucky, apricot jam. However, we also had family friends who would send us a box of hamantaschen every year. Those hamantaschen, were, I think, less delicate than my mom’s–they had to survive a journey through the mail from Minnesota to Texas after all. But, in addition to traditional and jam-filled varieties, there would be CHOCOLATE and COCONUT. For eight-year-old me, this was super exciting.

I imagine I would appreciate my mother’s delicate hamantaschen dough now, and maybe even the prune filling. But, thirty years later, I still can’t imagine picking a prune-filled cookie over a chocolate one.

One of the nice things about being a grown-up is that I get to bake the things I like to eat. Last year, that meant espresso shortbread hamantaschen with Nutella, from a recipe I came across on the internet. They were good, but this year, I wanted to try those flavors in a cookie with a slightly crisper texture and sharper hints of espresso. I also wondered if I might incorporate some of the 3 lb. bag of hazelnut meal that I impulse bought a few months ago. A bit of googling led me to the Washington Post’s Food section and a recipe for “almond hamantaschen” that seemed ripe for adaptation.

I’m pleased to say the results were exactly what I hoped for: A slightly crisp cookie with distinct hazelnut and espresso flavors. And of course, Nutella.

I won’t pretend this is the easiest hamantaschen recipe–the dough is a cinch to make, but extremely soft and sticky to work with if it’s not very cold. However, chilling the dough thoroughly, being generous with the flour when you’re rolling the dough out, and keeping a bench scraper handy will make things easier. 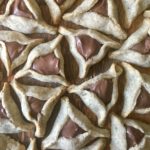 The espresso-hazelnut dough for these hamantaschen is adapted from this recipe in the Washington Post. Don’t be afraid to be generous with the flour when rolling the dough out, and have a bench scraper handy.

The dough for these hamantaschen is a cinch to make. . . . And a bit finicky to work with. The original recipe called for chilling the dough 30 minutes before rolling out. I found that, with 30 minutes of chilling, the dough was still incredibly soft and sticky, and practically impossible to work with even using a very well-floured surface. After struggling to form a few circles and get them onto the baking sheets, I gave up and stuck the dough in the freezer for about 15 minutes. That helped: while I still needed to use a non-skimpy amount of flour to roll the dough out, it was much easier to work with. So, if you don’t have 2 hours to chill the dough in the fridge, you could try this fridge-then-freezer method, too.

Even well-chilled, the dough is sticky. You’ll need more flour than you think you should be using in order to roll the dough out. And, regardless, you’ll probably have to employ the bench scraper a bit. Don’t worry, it’s the dough, not you.

If you don’t have a food processor (and I didn’t until recently), you could instead use room temperature butter, then cream the butter with the sugar, add the egg and cream, and finally mix in the dry ingredients. The dough may need to chill for slightly longer using that method.

You probably won’t need every bit of the 3/4 cup of Nutella to fill the cookies. I’m sure you’ll find a use for any extra.